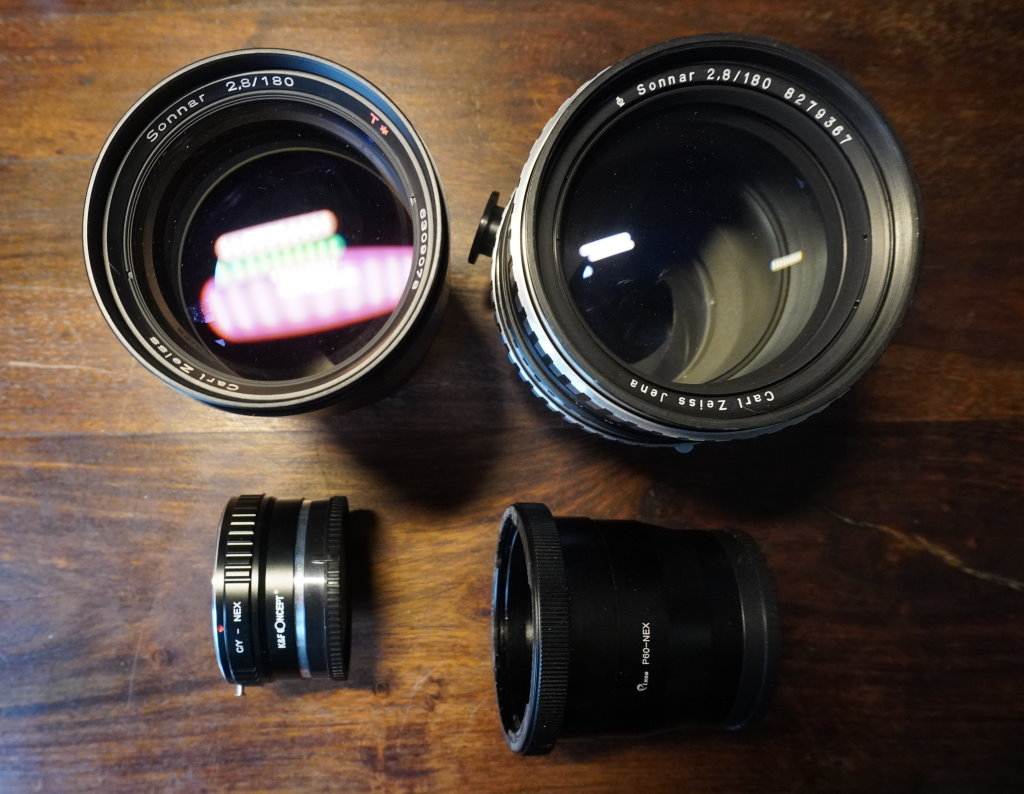 In this article about two classic lenses I will address the following:

There was D-Day, then Paris, the Rhine crossing, Weimar, and on 13 April 1945, American troops reached the German university city of Jena, where the precision optical industry was and still is the leading branch. The Americans had penetrated Germany faster than the Russian troops because the German Wehrmacht had made the eastern front their priority — they needed to stop the Russians from capturing the German capital Berlin.

The US troops stayed only a little over two months in Jena. According to the Yalta Conference in February 1945, Jena was to be handed over to the Russians by the end of June.

In Jena was the headquarter and main production site of Zeiss, a manufacturer of optical systems. The airplanes, submarines, tanks and guns of the German Wehrmacht were equipped with Zeiss devices. Because of the significance of the military optics produced in Jena, the Americans ‘relocated’ 77 Zeiss engineers and managers into the US occupation zone, which later became part of West Germany.

The decision was also made to relocate certain specific optical equipment and construction plans, which a convoy of trucks transported to Heidenheim, close to Stuttgart. The many big production machines, however, were left in Jena — time was too short for the Americans to organize their removal and they didn’t want to risk serious complications with the Russians.

For more information about the American troops liberating Jena (German language only) and the History of Zeiss, look here:

After the defeat of Japan, the interest of the USA in military optics subsided; it took until 1946 to start up Carl Zeiss West Germany as a repair shop and production facility in an industrial area in the south of Oberkochen, a small city north of Heidenheim.

For more information about the life in Soviet-dominated East Germany look here:

Olympia Sonnar 180mm f2.8: Made in West-Germany vs Made in East-Germany, which is the better lens?

Carl Zeiss in West-Germany promoted its Sonnar T* 180mm f2,8 lens in its sales brochure as: “Modern, especially light and compact version of the famous Olympia-Sonnar”

Anything but light and compact, and sporting a huge lens hood, the Carl Zeiss Jena 180mm f2,8 Olympia Sonnar lens made in East Germany:

Some real life photos of the Olympia Sonnar Carl Zeiss 180mm f2.8 Made in West Germany vs. East Germany

The Carl Zeiss T* 180mm f2.8 Olympia Sonnar lens Made in West Germany shows a nice 3D-pop because of its micro contrast, especially in the last deer photos. Look how similar the bokehs of the two lenses are with the common predecessor lens made for the Olympic Games in Berlin 1936. Click on the photos to enlarge.

The bokeh in the back of the focused object

Take a look at the Ninja star bokeh of the Olympia Sonnar Made in West Germany at aperture f4 in the photo “A7 04299”. Compare the beautiful bokeh of the two Sonnar classic prime lenses with the onion style bokeh of the modern lens. Click on the photos to enlarge.

The bokeh in front of the focused object

The bokeh of lenses in front and in the back of the focussed object is not necessarily the same, as you can see from above photographs. The Olympia Sonnar Carl Zeiss Jena 180mm f2.8 Made in East Germany excels in both bokeh disciplines.

The final verdict is simple.

If you don’t mind spending EUR 400 or more, get a Carl Zeiss T* 180mm f2.8 Olympia Sonnar made in West Germany, which is much more compact and has a higher optical image quality as the test results shown above demonstrate nicely. The effective T* multi-coating is an additional plus of the Olympia Sonnar Made in West Germany and reduces flares and ghosting very well. You get a lot of micro contrast with this lens, and the lens performs quite well with Carl Zeiss Mutar II 2x tele converter and makes a 360mm lens out of it.

It’s better to buy the “MM” Multi-Mode version, which is typically technically improved compared to the older “AE” lenses. The West Germany Olympia Sonnar tested here is the MMG type of lens with a floating element (“G” stands for Germany). For a lower price you can get a “MMJ” lens, which was made in Japan (probably by Cosina) and delivers the same image quality.

If you want to spend only around EUR 150 and don’t mind its size and weight, go for the Carl Zeiss Jena 180mm f2.8 Olympia Sonnar made in East Germany and adapt it to large format cameras up to 24 megapixel sensors. To adapt it to the Sony a6000 series with a APS-C sensor or to a Sony 7R type of full frame camera with 40 megapixels or more is not a good idea — the sweet spot of this lens does not deliver enough resolution.

And the lessons are:

Spend more money on your lenses than on your camera body.

The Zeiss Olympia Sonnar classic lenses deliver an outstanding image quality and bokeh for a small amount of money!

The tested Olympia Sonnar Carl Zeiss Jena 180mm f2.8 was made in East Germany in 1968. That same year, on the night of August 21-22, 200,000 troops and 2,000 tanks from the Soviet Union, Bulgaria, Poland and Hungary invaded Czechoslovakia and the capital Prague. The Soviet command refrained from drawing upon East German troops for fear of reviving memories of the Nazi invasion in 1939.

London agreement about the Zeiss brand in 1971

For future breach of agreement disputes, which repeatedly arose on the global market, the London agreement stipulated that the two sides should first discuss the cases with each other. This meant that face-to-face talks were held twice a year, alternately in Oberkochen, West Germany, and in Jena, East Germany.

This regular personal-style dialogue, which was said to have taken place during the daytime about the mutual violations of the London agreement and in the evening in a congenial atmosphere over dinners, was a first step towards the reunification of Zeiss.

The tested Olympia Sonnar Carl Zeiss T* 180mm f2.8 was Made in West Germany in 1987. That same year on the 12th of June, United States President Ronald Reagan famously declared in his speech before the Berlin Wall, “Mr. Gorbachev, tear down this wall“:

On November 9, 1989 a commander of the GDR border crossing was misinformed by a public announcement of East Germany’s government official Günter Schabowski. As a consequence, the commander allowed the guards to open the checkpoints and let people through with little or no identity checking. Soon afterwards, a crowd of West Berliners jumped on top of the Wall and were soon joined by East German youngsters.

In 1990, West-Germany and East-Germany reunited. The entry of Carl Zeiss Jena GmbH into the Commercial Register in 1991 marked the reunification of the two separate Carl Zeiss companies.

A HAPPY ENDING
for Germany and Zeiss
❧