To judge if both Biotar type lenses are still good for daily usage with modern digital cameras, both are adapted and tested on a Sony alpha 7ii full frame camera and compared with the modern Canon EF 50mm f1.8 STM lens. We’ll also check both lenses for a swirly bokeh.

The famous lens designer Dr. Willy Merté created the Biotar at Carl Zeiss. It was an optimized successor of the Planar lens, which was designed in 1936 as the Biotar 58mm f2 “kit lens” for the Kine EXAKTA 35mm camera  — the most innovative 35mm film camera before World War II. For the mathematical calculation of the Car Zeiss Biotar 58mm f2, 480 calculation steps were necessary, which resulted in a manuscript of 3200 pages closely described with numbers, on which 2 “human computers” worked for 3 years (Johannes Steiner: Fototaschenbuch 1959, Halle, 1958, page 156 and page 256).

Dr. Merté left Jena for Oberkochen in 1945 to help establish Carl Zeiss West Germany; he was under American protection, as were many of the company’s employees. In 1947, Dr. Merté went to the Unites States at the offer of the Institute of Optics of Boston University. He died the following year after a short illness in Dayton, Ohio.

The Carl Zeiss Biotar 58mm f2 lens was produced in several versions from 1936 until 1960, while the Russians produced their own versions of this lens as Helios 44 58mm f2 from 1958 until 1992. The Helios 44 lenses were in production for 34 years in several versions and served as the standard kit lens for their Zenith 35mm SLR cameras. The Helios 44 58mm f2 family of lenses, produced in the millions, are probably the most widely produced analog lenses in the world.

It’s best not to buy a Carl Zeiss Jena Biotar 58mm f2 classic lens without the quality label Q1 or without a Zeiss T coating if you’re looking for a lens with good image quality. If you check the lens offerings on e-bay, you will find many Carl Zeiss Jena Biotar 58mm f2 lens offerings without the Q1 label or without Zeiss T coating.

Tested was the pre-set version without black aperture stripes and with 10 aperture blades: https://www.pentaxforums.com/zeiss-58mm-biotar/

The tested Helios 44M-4 lens was made in the Valdai factory (logo:

) located almost half way between St. Petersburg and Moscow, while the Zenit camera was made by KMZ in Krasnogorsk (logo:

You can see more than 50 versions of the Helios 44 58mm f2 classic lenses here: https://radojuva.com/44-helios/ My tested Helios was the first multi-coated “MC” version h308 with 6 aperture blades.

Most Russian lenses indicate the year of production with the first two digits of the serial number.

The modern Canon EF 50mm f1.8 STM digital lens is a good comparison for the two classic Biotar lenses because it is known to be a performer both in image quality and with its creamy bokeh. If the classic Biotar or Helios lenses come close to the Canon EF lens, I assume they are good enough for daily usage on a modern mirrorless full frame camera like the Sony alpha 7 series cameras.

Read here about how a Biotar differs from a Planar and Biometar lens design and if the modern Canon EF 50mm f1.8 STM lens is similar to a Biotar 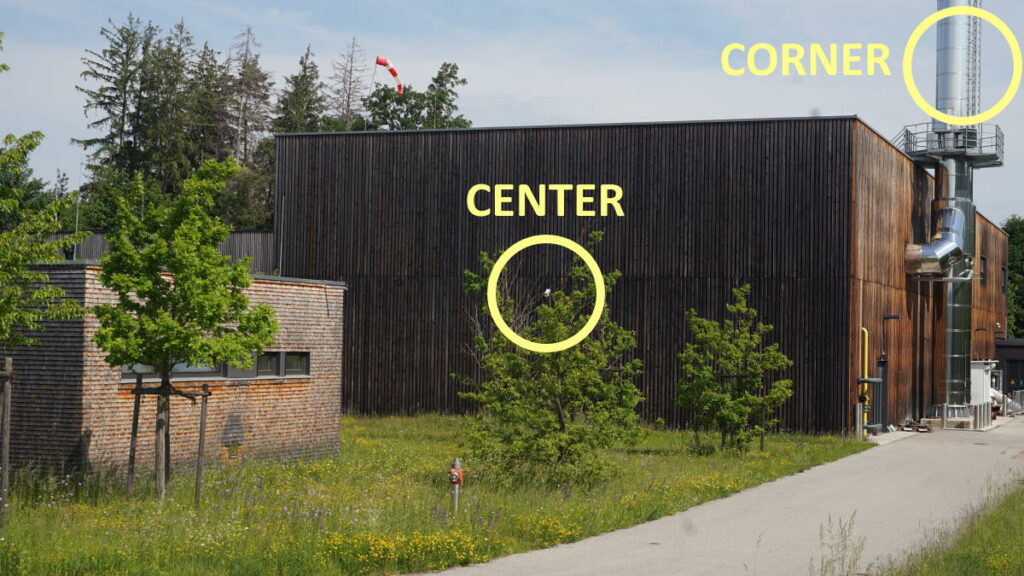 The Canon EF 50mm f1.8 STM lens was added in the test to compare the image quality of the classic Biotar type lenses with a modern digital lens. All lenses were shot at aperture f2, f4 and F8. The center sharpness of all 3 lenses are somewhat on par, but with a slight advantage for the modern Canon EF lens at aperture f2 and f4:

The corner sharpness of the classic Biotar type lenses is much less compared to the modern Canon EF lens at aperture f2 and f4, but is on par if the aperture is stopped down to aperture f8:

Click on the photos to enlarge. In some of the flower photos, which are shot with open aperture f2, you will find a nice swirly bokeh.

For flower photos like in the gallery above (in bright sunlight with open aperture f2), you should better use a ND8 neutral density filter to avoid over-exposure and a lens hood to avoid lens flare.

The bokeh behind the focused object

The swirly bokeh comes best when the object in focus is approx. 2 meter away and the background out of focus is 5-7 meter away.

In my opinion, stopped down to aperture f8, both tested lenses show sufficient sharpness in the center and the corner to deliver a good image quality on the Sony alpha 7ii full frame sensor for landscape photos.

At open aperture f2, both Biotar lenses excel if you like a lens with a sharp center and a unique and very beautiful bokeh with a lot of character. If you look at the photos in the gallery above, its no wonder that the Carl Zeiss Jena Biotar 58mm f2 classic lens is praised at so many other websites and in so many YouTube videos.

But the image quality of classic lenses is very dependent on the serial dispersion in quality and on the conservation level of the respective individual pieces. In this respect, I may have been lucky to have tested two Biotar lenses that were of above average image quality.

The image quality of the German and Russian Biotar lenses are so similar that you can save around EUR 150 without being disadvantaged by buying a Helios 44M-4 58mm f2 for approx. EUR 50. It’s best to avoid the Helios 44M-5, 44M-6 or 44M-7 lenses though; it’s highly likely that you’d get an over-priced 44M-4 lens with “fake lettering” instead.

On a Sony a6100 camera with 24 megapixel APS-C sensor both lenses performed quite well, look at following blog post “More than Swirly Bokeh“:

The tested Carl Zeiss Jena Biotar 58mm f2 classic lens was made in East Germany in 1953. That same year on June 16th, an uprising began with a construction workers strike in East Berlin. They were striking against the labor quotas during the Sovietization process in East Germany. On June 17th, the demonstrations in East Berlin turned into a widespread uprising against the government of the GDR and the Socialist Unity Party, in which over a million people took part. It was violently suppressed using tanks by the Soviet armed forces.

The tested Helios 44M-4 58mm f2 classic lens was made in Russia in 1990. In that same year, the first McDonalds Restaurant opened its doors in Russia and Boris Yeltsin became the first ever elected president of Russia.