There are a few good reasons to compare these two lenses

Don’t be surprised about the yellowish images taken with the Flektogon 35mm lens. The lens seems to use a type of glass containing thorium, which is known for its high refractive index but is prone to yellowing when stored in the dark. By developing the images from RAW files, this coloration can be completely neutralized. For the comparison photos below I intentionally kept the yellowish coloring for easy destinction between the modern Batis Distagon and classic Flektogon lens.

Carl Zeiss in West Germany created the new registered brand name Distagon after World War II to distinguish its retrofocus lenses from Carl Zeiss Jena’s Flektogon in East Germany. The name Flektogon derives from the Latin flecto, meaning “bend or curve”, and the Greek γωνία (gonia), meaning “angle or corner”. The name Distagon derives from “distance”, and also from the Greek γωνία (gonia), which refers to the wide angle of view of this type of lens.

Some of the following comparison images were shot at Wasserburg am Inn (also known as the Venice of Bavaria). Wasserburg is a small medieval village east of Munich, Germany, nearly surrounded by the long, wide River Inn, which flows into the Danube.

To ‘pixel peep’, click on a photo between 1 and 12 to enlarge it, then click the Original-size button to see the photo in full 24-megapixel resolution.

At f2.8, the Zeiss Batis Distagon 40mm lens is far superior in image quality, but at aperture f8, the classic Flektogon 35mm lens shows a surprisingly good image quality in the center and corners, especially for such an old lens.

Shining chrome and noble sheet metal from all eras of automotive history. After a two-year break due to the coronavirus disease pandemic, the Maxlrain vintage car event took place again in June 2022, not far away from Wasserburg am Inn. The event around Maxlrain castle, located about 50km southeast of Munich, Germany, is the largest vintage car meet in southern Germany.

Almost all photos from the vintage car event are taken with the modern Batis Distagon 40mm f2 and classic Flektogon 35mm f2.8 lenses:

Some more photos from the same vintage car event at the Maxlrain castle. These photos are 1-to-1 comparison photos of the modern Batis Distagon 40mm f2 (left) and classic Flektogon 35mm f2.8 (right) lenses:

Do you know about the secret message on the old French 50-francs banknote?

A secret microprint message is located in the uppler left part of France’s old 50-franc bank note. It is seemingly a string of random letters: RISDANSLESBRASILYAVAITSURU and so on (click on image to enlarge). However, the letters are not at all random. It turns out to be an excerpt from author Antoine de Saint-Exupéry’s cult novel The Little Prince, repeated over and over, with all spaces and punctuation removed.

It says, “Il y avait sur une étoile, une planète, la mienne, la Terre, un petit prince à consoler! Je le pris dans les bras.”  Translated into English, it says, “It was necessary, on a star, a planet, on mine, here on earth, to comfort a little prince! I took him in my arms.”

I would say that both lenses are somewhat on par when zoomed into the same image detail. What is your view? Don’t hesitate to leave a comment below the article.

This article is still in the draft stage. My preliminary conclusions on the Distagon and Flektogon lenses are as follows:

Both lenses have a special challenge for close focus distances: the lenses close the aperture for a small step. That means that bokeh images in close focus sometimes show the shape of the aperture blades in the bokeh balls.

If you find yourself in downtown Wasserburg am Inn, don’t miss the “Bosna Grill” (klick here for Google Maps location) for its spicy and delicious Balkan sausage with onions and parsley. You’ll find Bosna Grill near the city hall on the side of the Frauenkirche (Church of our Lady). Have a look at these street photos from the small but beautiful Wasserburg am Inn. A closer exploration of Wasserburg’s old town reveals many fascinating hidden corners — it perfectly embodies the saying the best things come in small packages. Thanks to Marlon for sharing some of his Wasserburg street photos and the friendly permission to publish the Bosna Grill photos.

Further lens comparisons between the Zeiss Batis Distagon 40mm and the Carl Zeiss Jena Flektogon lens will be carried out by mid-July 2022. In particular, the bokeh will be checked. Expect some interesting results, the first related test photos are spectacular! 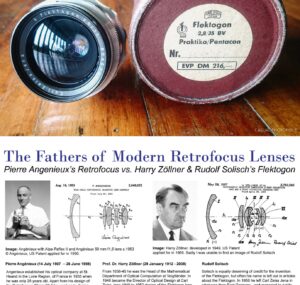 Read this excellent article by Cheyenne Morrison from Queensland, Australia. It’s about the Carl Zeiss Jena Flektogon 35mm Wide Angle Lens History and the inventors of the modern retrofocus lenses, Pierre Angenieux and Harry Zöllner. Click on the image to read the article.

Check out this informative video by Mark Holtze from the Greater Toronto Area, Canada. It’s about the history of the legendary Carl Zeiss Jena Flektogon 35mm f2.8 lens. Click on the image to watch the video.

One Reply to “Zeiss Batis Distagon 40mm vs. Carl Zeiss Jena Flektogon 35mm — how much better is the modern lens than the classic lens?”